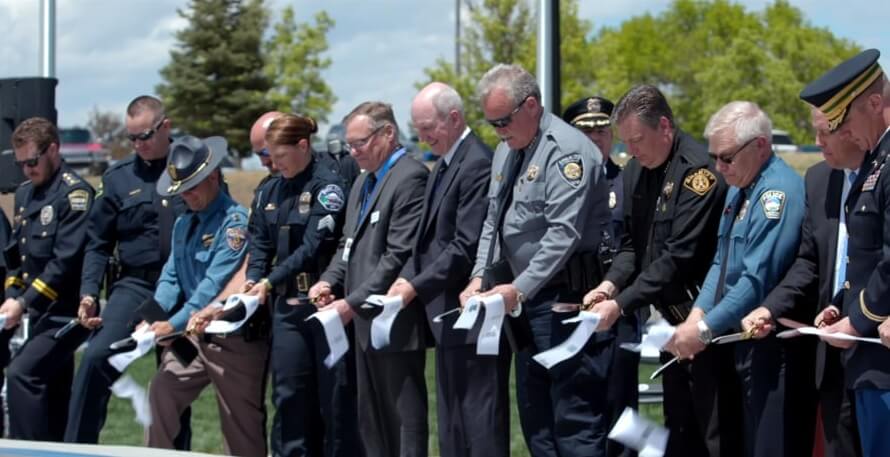 In conjunction with the Pikes Peak Region Peace Officers Memorial Regional Committee, N.E.S. Inc was privileged to be able to partner with the Committee on the new direction of the Memorials Design and implementation.  Through the efforts and leadership of the Regional Committee formed in 2014, a new vision and design effort was pushed forward to look at the renewed goal of honoring the peace officers who served our community.

N.E.S. Inc worked with the Regional Committee early on to revise the initial design concepts and integrate the context of the goals in honoring the Fallen Officers with past programmatic elements and design efforts.  Early on it was decided that the context of Memorial both aesthetically and implied through placement of key elements should honor and embody the sacrifice of the officers and the badge and freedom they protected.

This Memorial is dedicated to the men and women of law enforcement who have died in the line of duty. The Memorial honors federal, state, local and military law enforcement officers who made the ultimate sacrifice in service to and protection of the people of the Pikes Peak Region.

The Memorial features an entrance aligned towards Pikes Peak, a curved wall, and a fallen lion resting upon a base of granite. The embracing wall is low lighted by the thin blue line that separates Good from Evil.  The wall rises to encircle the fallen lion. The lion faces the Veterans Memorial, in honor of our military partnership. A walk of honor with donated pavers extends 200 feet from entrance to the foot of the base upon which the lion rests. Based upon the Lion of Lucerne, the Noble Lion embodies the protector, head bowed, protective paw extended, proving loyalty, courage, and bravery to the end. The entire structure encompasses 71,000 square feet.  Names of the fallen, agency served, and “End of Watch” date, may be found on the granite base.  Law enforcement shields are embedded in the wall. The fallen lion was sculpted by Colorado Springs resident Larry Terrafranca.

In 1962, President John F. Kennedy signed a proclamation creating May 15 as Peace Officers Memorial Day and the week in which that date falls as Police Week. In 2005 this Memorial was envisioned by law enforcement families and citizens from El Paso and Teller County as an everlasting tribute for conducting the May remembrance while honoring those sworn officers who gave their ultimate devotion to duty.  All funds used to acquire the site, design, build, and sustain the Memorial have come from private donations. The foundation and committee members who tirelessly labored to create the Memorial have all been volunteers. The intent of the Memorial and the Foundation is to create a peaceful place where parents can educate their children about the call of duty and the commitment to liberty, while offering solace to those who mourn our heroes.

“Heroes never die. They live on forever in the hearts and minds of those who would follow in their footsteps.” -Emily Potter